Location intelligence refers to the information that one can gather from the “position” of an object. In healthcare, it underpins the idea that if a disease occurs somewhere, the ‘where’ has either played a part in its genesis, has had significant impacts on its characteristics and/or will significantly impact its future diffusion through space and the population.

Medical Geographer, Dr. Melinda Meade postulated the view of disease as an interaction among 3 variables: population (nutritional and immunological status, age and gender), environment (all of built, natural and social environments) and behavior (perceptions of risk, diet, technology). All three variables differ across space and as such the location of a patient holds significant meaning when it comes to diagnosis. However, despite the growing recognition of the role that location plays in disease incidence and prevalence and the even further rapidly growing methods of measuring geospatial location, a patient’s movements and locations are still largely ignored by the medical community during diagnosis.

Much like how DNA tests can reveal someone’s predisposition towards certain diseases, one’s “locational history” can offer similar clinically relevant information: In Kenya, a group of researchers have combined mobile phone data with a high-resolution malaria prevalence map to analyze the travel patterns of nearly 15 million individuals over a year, resulting in clear demarcation of sources (origin) and sinks (destination) of the disease. Using similar methods, it is fairly easy (albeit nothing is as easy as it sounds when it comes to the actual implementation) to create a database of a person’s movement and location history and link it to certain relevant spatial and temporal factors, accessible by the clinical expert, for improved patient care on an individual level (Wesolowski et al., 2012).

Aside from the natural environment, the social-environment of a patient holds diagnostic clues as well. This is not a new concept but has already been established under the name of “neighbor effect”. It claims that some neighborhoods can have characteristics that enhance the residents’ quality of life while other neighborhoods have characteristics that have been shown to be harmful.

To illustrate the above point, consider the case of Cincinnati Children’s Hospital Medicine Center (Beck et al, 2012): the hospital investigated the use of area-based socio-economic measures to identify children at high risk for further asthma-related utilization (re-admission or return to the emergency department). 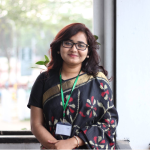 Undergraduate student of the Department of Geography & Environment, University of Dhaka. Member of GroupMappers.

This author does not have any more posts.